The external facing must meet different needs: aesthetic, technical, and functional. In addition to characterising the building aesthetically, the facing must be able to protect the structure from weathering and pollutants, while at the same time making it possible to achieve the desired thermal and acoustic performance.

The external facing must meet different needs: aesthetic, technical, and functional. In addition to characterising the building aesthetically, the facing must be able to protect the structure from weathering and pollutants, while at the same time making it possible to achieve the desired thermal and acoustic performance.The development of facing materials featuring high technical and aesthetic performance, such as Ariostea’s high-tech marble and stone, makes it possible to create extremely effi cient ventilated façades with an excellent resistance to hygrothermic stress and to weathering in general. Ariostea materials fully respond to the requirements of the external facing, thanks to the following technical properties:

Not being directly anchored to the building, the facing slab is free to move according to its own expansion coeffi cient, independently of the movements of the structural supports, and it can adjust to the settling movements and oscillations of the building thanks to the elasticity of the anchoring system. The joints must be suitably sized to absorb movements, to allow the slabs to shift and expand without interfering with each other. The joint is simply a space separating the slabs, allowing them to move freely in response to thermal expansions in the system and elastic movements. The joint varies from 4 to 8 mm, depending on the slab size, the distance between building fl oors, and the type of structure used. Fibreglass netting bonded to the back of the slab temporarily holds together any broken slab pieces until the slab can be replaced, which is a simple operation. Designs for a new building may include consideration of a particular facade module. The actual dimensions of the slab are added to those of the joints to develop a possible covering layout composed entirely of whole slabs. When dealing with facade components such as openings, string courses, or other non-modular elements, a situation often found in renovation projects, the number of slab cuts can in any case be reduced in order to correctly manage the different sizes and to limit costs.

The air gap, which is created inside the ventilated facade, is its main feature, as this sets up the so-called "chimney effect", i.e. effective natural ventilation that takes place in the space between the external cladding and the insulation layer applied to the building walls. This phenomenon is based on the physical principle according to which warm air tends to rise and is replaced by cool air from the outside. The portion of the heat that is able to pass through the facade covering heats the air in the air gap, which triggers the rising motion of the air. A large quantity of this heat is thus removed upwards and only a minimum part penetrates into the building, which is protected by the insulating layer. During the winter, the ventilated facade helps keep the heat inside the building, raising the thermal inertia of the walls, with consequent energy savings and greater comfort for the people inside. The circulation of air keeps the insulating layer dry, guaranteeing its effi ciency over time.

The external facing, separated from the building walls, "takes away" from the walls both the heat from solar radiation and the rainwater, thus avoiding direct contact with the perimeter wall and eliminating one of the main causes of building deterioration. Even when open joints are used, the quantity of water that is able to reach the insulation is minimal with respect to the total amount. Studies conducted in Germany have shown that the amount of water able to penetrate into the ventilated air gap and reach the insulating layer is a negligible percentage.

Compared to traditional cladding systems, the ventilated facade ensures a signifi cant improvement in the dispersion of water vapour present inside the walls, with clear benefi ts for the preservation of the walls themselves. The natural ventilation in the air gap, in fact, helps remove the moisture present in the walls of both new and renovated structures. Even the water vapour produced inside the building can in part come out through the wall without particular barriers, leading to greater preservation of both the perimeter wall and the insulating layer.

The layered construction, typical of the ventilated wall, along with the use of soundproofi ng materials, ensures better sound insulation. In fact, the external facing, the air gap, and the insulating layer work as further protective barriers towards noise coming from the outside.

The ventilated facade system creates complete thermal insulation by entirely wrapping the building in a "coat", preventing heat dispersion and eliminating heat bridges, i.e. the nonhomogeneous distribution of the surface temperatures which, in traditional walls, are normally created around beams and pillars. This prevents the formation of condensation and mould in the coldest areas. The continuous insulating layer positioned outside the building structure guarantees homogeneous thermal protection and an indoor temperature that is more constant over time. In addition, this system reduces the temperature ranges on the building walls, thus reducing structural movements due to the different expansion coeffi cients of the different materials composing the building.

The ventilated facade system is much more adaptable than traditional systems to thermal shocks caused by the outside temperatures and to the structural movements of the building. As the single slabs are anchored to the structural support independently, they can expand according to their own thermal expansion coeffi cient and adapt to the settling movements of the building thanks to the elasticity of the anchorings. This prevents stress in the covering that can cause deterioration of the facade and require maintenance operations.

Since the installation is carried out "dry", it can be done independently of the atmospheric conditions, since these do not affect the quality of the facade. The maintenance of a ventilated facade is extremely limited and easier. Thanks to the excellent resistance of the slabs, the enclosure of the building does not require frequent restoration, and any damaged slabs can be easily removed and replaced. When equipped with technical hollow areas, this system also makes inspections easier. These areas act as housing of wiring and cabling inside the structure.The fact that the slabs can be replaced without carrying out works on the walls also makes it possible to change the facing completely when desired, thus changing only the exterior appearance of the building. 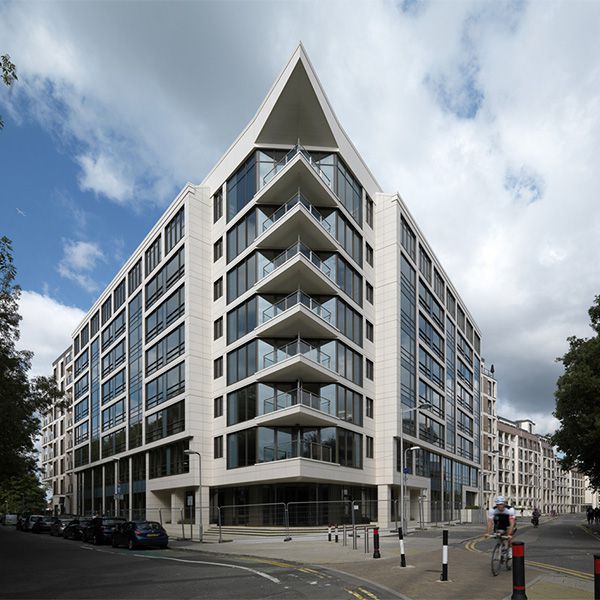 In the vanguard of production of high-tech materials for floors and walls, Ariostea offers its experience in the design and creation of coverings for large outdoor surfaces.